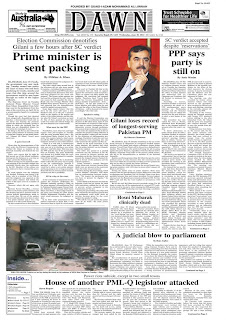 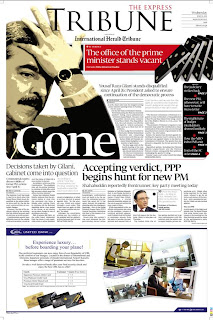 A dark omen for us all

सम्पादित अंश
By Ahmad Rafay Alam
Back in the Eighth Amendment days of yore, the Supreme Court of Pakistan was often called upon to determine whether a president or governor’s dismissal of the national or provincial assembly was constitutional. The Court didn’t swing the axe itself; it merely decided whether the blow was justified.


With June 19’s Supreme Court ruling that Prime Minister Syed Yousaf Raza Gilani ceased to hold office from April 26 on account of his conviction for contempt of court, the Court has, for the first time, dismissed a government.

There are many reasons to dismiss an elected representative. But they must be good, as the will of the people is not something to be taken lightly. A representative may be corrupt, in which case they have lost the moral authority to represent their constituency. A prime minister may be removed on a vote of no confidence, which means he has lost the ability to govern parliament.
In the present case, the prime minister has been removed because — as some see it — he has refused to comply with the Supreme Court’s direction to write a letter that may initiate criminal proceedings against the sitting president. Some argue that a convicted person cannot be prime minister.
Some of the petitions and applications upon which the Supreme Court made its decision were filed after the prime minister’s conviction. They were ably argued by, amongst others, AK Dogar and Mohammad Azhar Siddique (who brought CP 40 of 2012 titled Mohammad Azhar Siddique vs Federation of Pakistan in his own name). Some will recall AK Dogar as the advocate who represents Hafiz Saeed before the Lahore High Court. And who can forget Azhar Siddique, the lawyer behind the petition seeking a ban on Facebook and founder of the alternative social media website Millat Facebook.

But by far the most troubling activity in the Court this past week was the brouhaha that sparked up between the attorney general of Pakistan and senior lawyers when the latter employed what can best be described as an ultra vires hand gesture during arguments. Such scenes have hitherto been the domain of the district courts and evening news reporting. Nevertheless, it is often said that violence begins when sane men lose their ability to reason. The fact that reason is lost on the courtroom floor is a dark omen for us all.
Published in The Express Tribune, June 21st, 2012.

The History of Swiss Case
Contrary to the views of many in Pakistan, June 19, 2012 was one of the bleakest days for democracy in the country. An elected prime minister was disqualified by the highest bench of the judiciary on charges of contempt of court. The case made history as it remains the only case in Pakistan which resulted in the termination and disqualification of an elected representative of the parliament.
The contempt of court case was initiated against Yousuf Raza Gilani when he refused to correspond with the Swiss authorities to reopen money laundering case against President Asif Ali Zardari
The history of the case can be traced back to the first term of Benazir Bhutto. It all began when the constitutional order was amended which empowered the president and restricted the prime minister’s powers. Ghulam Ishaq Khan was elected as the president of the country in 1988 and appointed Benazir Bhutto as the prime minister of Pakistan. However, the power struggle between them was evident from the beginning which came to an end when Khan in August 1990 dissolved the national assembly and dismissed Bhutto on charges pertaining to corruption as well as failure to maintain law and order.
Muhammad Nawaz Sharif was elected as the prime minister on November 1, 1990. However, in 1993, Khan again exercised his power through the eighth amendment of the Constitution and dismissed Sharif. The Supreme Court intervened and reinstated Sharif which eventually forced Khan to resign but Sharif’s term ended in the same year.
In 1993 Bhutto was re-elected as the prime minister of the country. Bhutto’s second tenure marked many controversial events including the assassination of Mir Murtaza Bhutto which sabotaged her political career significantly. The then president, Farooq Laghari, dismissed her government after three years over charges of corruption and mismanagement.
Asif Ali Zardari, although never convicted, was in prison from 1997 to 2004 on charges pertaining to money laundering, corruption and murder.
Sharif was re-elected as the prime minister of Pakistan and initiated the case in Switzerland in 1998 which accused Benazir and Asif Zardari to have embezzled $60 million in kickbacks in Swiss bank accounts. In August 2003, both, Benazir and Zardari were found guilty of the scam. However the penalties that summed up to a fine of $100‚000‚ and the order that they return some $2 million to the Government of Pakistan‚ were suspended on appeal.
In 2007, Benazir and Pakistan Peoples Party (PPP) allegedly negotiated a deal with Pervez Musharraf who issued an amnesty law under which the corruption cases were considered closed. However, in 2009, soon after his reinstatement, Chief Justice Iftikhar Mohammad Chaudhry who was suspended by Musharraf in 2007, ordered to reopen the Swiss case. However, Daniel Zappelli‚ Switzerland’s prosecutor-general said that head of the state cannot be prosecuted as he enjoys immunity and if Pakistani authorities decide to lift the immunity then he should be tried in his own country.
In the latter half of 2010, Saif-ur-Rehman, who served as the interior minister during Sharif’s second term, revealed the fact that Sharif coerced the judgement on Swiss case against Bhutto and Zardari. The proceedings of the Swiss case were expedited on Sharif’s demands and the penalty was also influenced by him.
The proceedings and the verdict, as revealed by Saif-ur-Rehman, cast doubt on the authenticity and transparency of the same.
In 2011, the Supreme Court ordered Gilani to send a letter to Swiss authorities to reopen the graft case against the head of the state. However, Gilani did not comply with court’s orders because he was of the view that Zardari enjoys immunity being the head of state. The Supreme Court charged the former prime minister with contempt of court and declared him convicted of the same on April 26, 2012. Gilani was formally disqualified on June 19, 2012.
From Dawn.com
at 7:46 AM