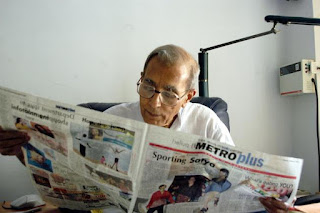 
Staying away from the limelight of publicity despite being the powerful Editor of an influential newspaper and the Managing Director of the company running it, G. Kasturi had a single-minded focus through most of his life: to take The Hindu to new heights in a fast-changing media milieu. He seemed to allow himself hardly any distraction from his work and mission.

Characteristically, he was the old-world Editor who preferred not to be seen or heard in the public sphere, but only be read and felt through the columns of the newspaper. Yet, he travelled the world, in particular evincing keen interest in industry-related events and exhibitions. He lived the trust, held himself up to the legacy he inherited, and left the newspaper the better for it.

Mr. Kasturi, the longest-serving Editor in the history of the 134-year-old newspaper (a tenure that was almost matched by his uncle, Kasturi Srinivasan, from 1934 to 1959), consistently found the golden mean. He could balance his prowess and interest in the technological aspects essential to taking a newspaper forward on a path of long-term consolidation and expansion, while giving full play to his editorial acumen and vision. Even as he banked on the organisation’s traditional strengths, he took it forward, cautiously and carefully, on to a modern platform.

Mr. Kasturi was indeed the moderniser, innovator and visionary who led The Hindu during a critical phase of its history. He brought it up to speed in an era in which technology came to play a leading part in transforming the industry. He took the newspaper forward from a slow-paced era, to a mode in which it could meet the new information needs of a growing English speaking population.

He was a quintessential editor with a deft touch that would transform copy, and a quick judge of argument and polemic, fact and fiction. Heavy re-writing was not his preferred style on the editorial desk. He was particularly good at spotting and encouraging talent.

His deep understanding of aspects of newspaper design and typography was unmatched, and widely acknowledged among industry leaders of his time. He was on top of all aspects of newspaper production, and over the years initiated a remarkable set of changes that added to the visual appeal of presentation, in addition to the language, tone and tenor of reporting and other writing that went into it.

His style of work was characteristic. He would trust, but verify. He would tend to depend on key people in the organisation a lot, yet in the end would keep his own counsel.

Younger colleagues were often left speechless at his willingness and ability to stay on through the night as a prototype press that the company acquired from the French conglomerate Creusot-Loire was being put through its paces in Chennai. Then in his 60s, he would often leave the press in the small hours of the day with grime and grease on his hands – and return to work to his corner office in Kasturi Buildings in the forenoon itself.

Mr. Kasturi will be remembered within The Hindu, and across the industry among a significant section of industry players of a generation, for his vision. Working with his brother G. Narasimhan, who was Managing Editor (till his passing in July 1977), he rolled out unique means and solutions to set a scorching pace of growth and expansion for the newspaper. It was a crucial period of its transition from being a largely southern Indian-provincial newspaper to a truly national vehicle. He helped consolidate and streamline a system of air-borne distribution of copies across southern India for early morning delivery. The company first chartered Indian Airlines aircraft for the purpose, and then went on to acquire aircraft of its own.

Leading the next big wave of expansion for the newspaper, he helped develop the facsimile system of transmission of page images, the first of its kind in Asia. The first ‘remote’ edition was started in Coimbatore in 1969. The next one was in Bangalore in 1970. More printing centres and tailored regional editions followed. The Hindu today has 17 editions in different parts of the country: it moved on to digital transfer of pages in the 1990s, and today works on a seamless and real-time platform across its production centres.

He was the principal driving force behind making The Hindu the first mainline newspaper in India to go for computerised phototypesetting during 1980. Creditably, The Hindu kept on board during this major technological transition from hot metal technology to computer-based technology that demanded a new skill set, the same people who were working in the earlier technology: the company gave them training and re-orientation to take on the new roles. Nobody had to be sent away.

Mr. Kasturi is credited with initiating a policy of appointing staff correspondents in district towns across southern India, and in State capitals where they were not already in place.

In 1968, The Hindu received the World Press Achievement Award of the American newspaper Publishers’ Association Foundation. Mr. Kasturi received on behalf of the newspaper, the gold medallion representing the award, at a function at the Waldorf Astoria in New York.

Towards the end of 1977, The Hindu introduced the features titled ‘Outlook,’ ‘Special Report’ and ‘Open Page,’ under Mr. Kasturi’s stewardship. He showed keen interest in making these a success.

He worked hands-on, intensely so, with colour scanning equipment that The Hindu acquired in 1982, the first newspaper organisation in India to acquire one for in-house use. His meticulous approach to ensuring picture quality at the photographers’ end and all the way up to the printer’s hands, allowed The Hindu to maintain printing quality standards of an exceptional kind.

His knowledge and application of matters technical was matched only by his keen penchant for excellence in journalism.

After his retirement, Mr. Kasturi continued to be involved and remain intensely interested in different aspects of the organisation’s development and growth.

In 2004-05, he followed and involved himself in the major exercise of redesigning The Hindu, undertaken by Mario Garcia.

One of his principal anxieties related to mediocrity in the organisation. He made it a point to interact periodically with a wide cross-section of senior staff members of the organisation. Interestingly, one of the latest meetings he had was with a group of three relatively young staff members of The Hindu towards the end of April. With them he spent upwards of two hours in his house, discussing how the organisation needs to focus on roles and tasks for the future.

He continued to work his passion for newspaper design, experimenting with tools and methods in a fully equipped home-office.

In is recent years in retirement, he made it a point to visit Kasturi Buildings, the headquarters of the company, to interact extensively with technical and also editorial personnel with a view to conveying the expertise at his command — and also learning in the process, as he would put it. This was a rigorous journey focussed on his life’s work and mission.

Photography was a particular area of interest and indeed fascination for Mr. Kasturi. He never tired of discussing with the photographers of the newspaper ever-newer ways of getting better images and maximising the use of equipment.

He knew many of the employees of the company by name, and had pleasant, gentle and kind-hearted dealings with a large number of them over a long period. The hearty applause, predominantly among employees and former employees of the company, that filled the University Centenary Hall in Chennai at a function marking the 125th year celebrations of The Hindu in Chennai in 2003, as Mr. Kasturi made an entry, bore ample testimony to this. His soft-spoken and but firm manner, and simple attire at work, were memorable.

For Mr. Kasturi, one of the most challenging phases of his stewardship of the newspaper was witnessed during the period of the Emergency that saw newspapers coming under unprecedented pressure from the government.

Mr. Kasturi was a deeply religious person throughout his life.

He lived to see the organisation he devoted his life to, making a significant transition over the past few months into one that is set on a new management path involving professionals who come from outside of the family that owns the company, in key positions for the first time. As Kasturi and Sons thus moved on to face up to the emerging opportunities and challenges of the market, he was the happier for it. 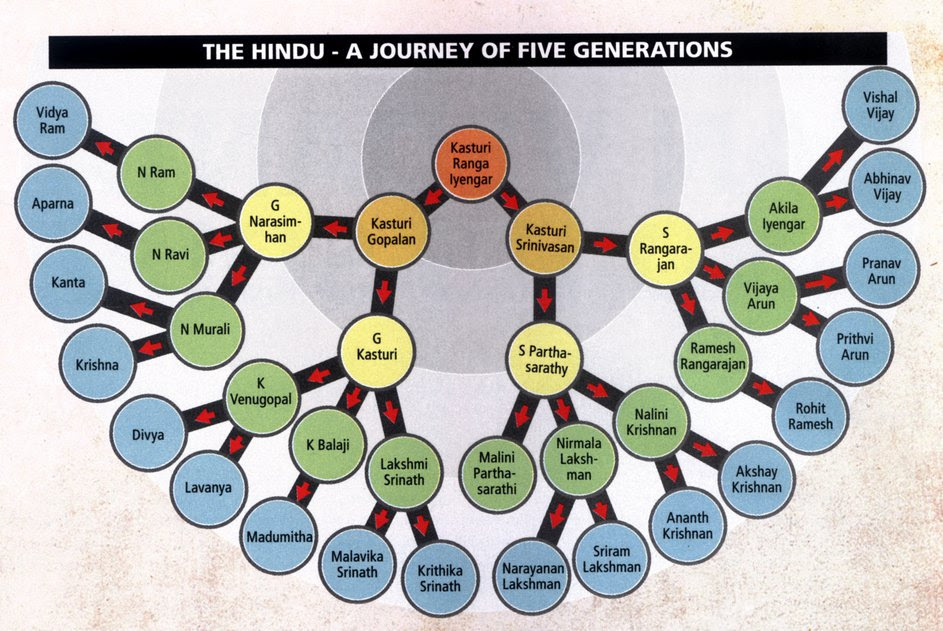 
Except for the Indian Express, the leading light during the Emergency, practically all papers preferred to side with the government.
The two of the worst were The Hindu and the Hindustan Times.
Hindu’s editor G. Kasturi became a part of the establishment. He headed Samachar, the news agency that was formed after the merger of PTI, UNI and Hindustan Samachar. He obeyed the government diktat on how to purvey a particular story or suppress it. He could not withstand government pressure.
The Hindustan Times, owned by the Birlas, was always with the Congress. K.K. Birla, then its chairman, took over as chairman of the Indian Express and changed its editor by replacing incumbent S. Mulgaonkar with V.K. Narasimhan, who proved to be a tough nut to crack. Birla was the complete opposite of Ramnath Goenka, the owner of the Indian Express. Goenka fought the government tooth and nail and staked all that he had built in his life….
The Times of India was edited by Sham Lal, who had impeccable credentials. Girilal Jain, the resident editor in Delhi, too stood by the principle of free press. Both were pro-Indira Gandhi but against press censorhip. However they felt handicapped because the management wanted to play it safe.
Ananda Bazaar Patrika owner Ashoke Sarkar was a man of courage and gave his blessings to his principal correspondent Barun Sengupta’s fight against the emergency. The paper, however, managed to escape the wrath of the then West Bengal chief minister Siddhartha Shankar Ray, who was the author of the Emergency.
My friend K.M. Mathew, the owner of the vast empire of Malayala Manorama, stood his ground and despite the pressures on him showed where his sympathies lay when he invited to open a photo exhibition at Kottayam after my release from jail. The country was still in the middle of the Emergency. Yet, Mathew showed his annoyance in his own way.”

मीडिया ब्लॉग सैंस सैरिफ ने कस्तूरी और एन राम के विवाद के बारे में लिखा है-
In 1989, when the Bofors scandal was at its peak, Kasturi got into a public spat with his nephew and then associate editor, N. Ram, as the shadow of the scam lengthened.


In October that year, The Hindu published the first part of a three-page article (authored by Ram and Chitra Subramanian) with the promise “To be continued”. However, Kasturi blocked the second instalment and published a front-page noteexplaining the discontinuation.
It read:

“Enough has been written supported by extensive documentation in The Hindu to establish the face of the cover-up and the non-serious pursuit of the investigation by the official agenies and give the lie to the government’s latest assertions.”

Miffed, Ram went public and issued a statement against his uncle (G.Kasturi is Ram’s father, G. Narasimhan‘s brother) for acting “arbitrarily, capriciously and in a manner highly derogatory of the traditions, norms and values of independent, ethical journalism,” and calling the editor’s note “a conspicuous insult to the traditions of independent, intellectually and socially serious, and ethical journalism.”