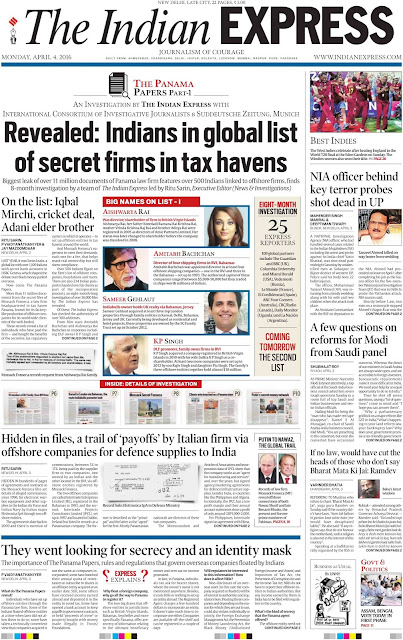 
Written by Ritu Sarin , P Vaidyanathan Iyer , Jay Mazoomdaar | New Delhi | Updated: April 4, 2016 8:42 am
From film stars Amitabh Bachchan and Aishwarya Rai Bachchan to corporates including DLF owner K P Singh and nine members of his family, and the promoters of Apollo Tyres and Indiabulls to Gautam Adani’s elder brother Vinod Adani.
Last year, it was Swiss Leaks, a global list with over 1,100 Indians with secret bank accounts in HSBC Geneva, which shaped the debate over black money parked overseas.
Now come The Panama Papers.
More than 11 million documents from the secret files of Mossack Fonseca, a law firm headquartered in tax haven Panama, known for its factory-like production of offshore companies for its worldwide clientele of the well-heeled.
These records reveal a list of individuals who have paid the firm — and bought the benefits of the secretive, lax regulatory system in which it operates — to set up offshore entities in tax havens around the world.
And Mossack Fonseca’s eagerness to meet their demands, each one for a fee, that helps mask real ownership but still show compliance.
Over 500 Indians figure on the firm’s list of offshore companies, foundations and trusts. There are also 234 Indian passports (handed over by clients as part of the incorporation process), an eight-month-long investigation of over 36,000 files by The Indian Express has revealed.
Read in details here
The Hindu
A documents has exposed the secret offshore dealings of aides to Russian president Vladimir Putin, world leaders and celebrities including Barcelona forward Lionel Messi.
An international coalition of media outlets on Sunday published what it said was an extensive investigation into the offshore financial dealings of the rich and famous, based on a vast trove of documents provided by an anonymous source.
The International Consortium of Investigative Journalism, a non-profit organisation based in Washington, said the cache of 11.5 million records detailed the offshore holdings of a dozen current and former world leaders, as well as businessmen, criminals, celebrities and sports stars.
A documents has exposed the secret offshore dealings of aides to Russian president Vladimir Putin, world leaders and celebrities including Barcelona forward Lionel Messi. An investigation into the documents by more than 100 media groups, described as one of the largest such probes in history, revealed the hidden offshore dealings in the assets of around 140 political figures —— including 12 current or former heads of states.
read in details here
The Guardian
The hidden wealth of some of the world’s most prominent leaders, politicians and celebrities has been revealed by an unprecedented leak of millions of documents that show the myriad ways in which the rich can exploit secretive offshore tax regimes.
The Guardian, working with global partners, will set out details from the first tranche of what are being called “the Panama Papers”. Journalists from more than 80 countries have been reviewing 11.5m files leaked from the database of Mossack Fonseca, the world’s fourth biggest offshore law firm.

The records were obtained from an anonymous source by the German newspaper Süddeutsche Zeitung and shared by the International Consortium of Investigative Journalists with the Guardian and the BBC.
Though there is nothing unlawful about using offshore companies, the files raise fundamental questions about the ethics of such tax havens – and the revelations are likely to provoke urgent calls for reforms of a system that critics say is arcane and open to abuse.
The Panama Papers reveal:

The company has flatly denied any wrongdoing. It says it has acted beyond reproach for 40 years and that it has had robust due diligence procedures.
The document leak comes from the records of the firm, which was founded in 1977. The information is near live, with the most recent records dating from December 2015.
Three hundred and 70 reporters from 100 media organisations have spent a year analysing and verifying the documents.
David Cameron has promised to “sweep away” tax secrecy – but little has been done. He is planning a summit of world leaders next month, which will focus on the conduct of tax havens.
The prime minister set out his line in 2011 when he said: “We need to shine a spotlight on who owns what and where the money is really flowing.”