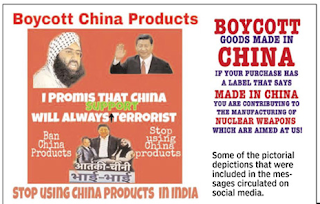 Diwali, one of the most important Hindu festivals and one of the biggest shopping seasons in India, is coming at the end of October, but encouragement to boycott Chinese goods has been spreading in the last few days on Indian social media, and even a few Indian politicians are exaggerating facts.

Chinese products are often the victim when regional situations get tense, and this phenomenon has been existing for quite a few years.

There have been at least two prominent Indian boycotts of Chinese goods in the past few months.

The first happened in April. It was caused by dissatisfaction over China's stand on the issue of Maulana Masood Azhar, leader of the militant group Jaish-e-Mohammed active in Kashmir, who is accused of committing terrorist acts in India. The second was in July and because of China's lack of support for India's bid to join the Nuclear Suppliers Group.

Now Chinese goods are on the stage again due to the Kashmir issue.


However, regardless of the passionate boycott in India and Indian media's hysteric reports of a "doomsday" for Chinese products, Chinese goods have never been condemned by Indian government and are popular across the nation.

The bilateral trade relationship is one of the pillars of the Sino-Indian relationship. The trade volume was over $70 billion in 2015, and China's investment in India soared to around $ 870 million in 2015, six times what it was in 2014.

The boycott has not achieved success. Sales figures for Chinese products on the top three Indian online retailers in the first week of October hit a new record. Amazingly, the Chinese mobile phone company Xiaomi sold half a million phones in just three days on the Flipkart, Amazon India, Snapdeal and Tata CLiQ platforms.

Some observers believe that China and India are competing with each other regionally and globally. While this might not be wrong, the negative effect of this competition shouldn't be exaggerated too much if we see it in an objective way.

For the dragon and elephant, enhancing economic ties would be a preferable way to promote the comprehensive bilateral relationship. The more economic cooperation exists, the more opportunities there will be for Chinese products to enter the Indian market. India is a big potential market, and people using smartphones and doing online shopping has become the irreversible trend in the new era.

The commercial cooperation between these two countries could also be focused on e-commerce, service and financial investment. The Alibaba mode has already been broadly studied and analyzed or even followed in India, which means the great demand for online business and financial services in India will definitely provide opportunities for their Chinese counterparts.

With enough experience and capital, some keen Chinese companies have already expanded their business into India. Hopefully, these early birds will get the worm soon.

The author is an assistant research fellow at the Center for South Asia-West China Cooperation and Development Studies, Institute of South Asian Studies, Sichuan University. opinion@globaltimes.com.cn Follow us on Twitter @GTopinion

Email ThisBlogThis!Share to TwitterShare to FacebookShare to Pinterest
Labels: Boycott of Chinese goods, India vs China