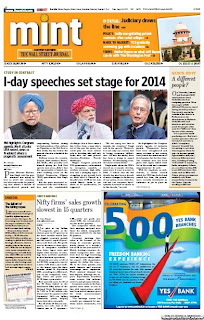 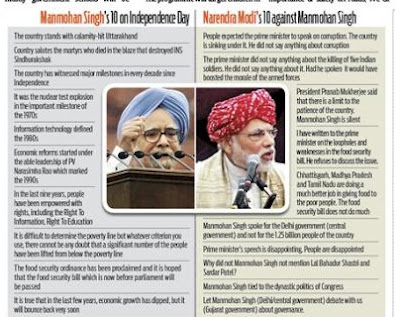 It is not that speeches on Independence Day, made by the prime minister or by chief ministers, are entirely above-the-fray and apolitical. In his speech, Bihar Chief Minister Nitish Kumar, for instance, underlined his demand for "special status" in a way that could be construed as a signal to the Congress in an election year. Prime Minister Manmohan Singh's allusion to "narrow and sectarian ideologies" seemed directly pointed at the BJP. Yet, Narendra Modi's I-day speech, from a college podium in Kutch, stood out for its audacious political choreography. On Thursday, Modi spoke not as a chief minister addressing the people of his state on a solemn national occasion, but as the BJP's campaign chief and presumptive PM candidate, using the visibility of the moment to tackle his political opponent. Modi has given ample warning earlier that, in terms of style and content, he is not the conventional political challenger. Even so, in making Independence Day the setting for a bare-faced election speech, Modi has crossed a line. He may have also set the stage for a campaign for 2014 that promises, or threatens, to be more aggressive and abrasive than those that have gone before.
Modi taunted the PM — for his "uninspiring leadership", his alleged allegiance to the Congress's first family, and for this being his "last" I-day speech. He targeted him on account of the leaders he named for their contribution to the nation, and for those he didn't. He compared the PM's speech unfavourably with the president's, on Pakistan and corruption. And challenged him to a Delhi versus Gujarat duel on their development records. At the end of it, though Modi also laid out political and policy disagreements on issues like national security and the food security bill, in its thrust and tenor, his speech discomfited not just his target, the Congress, but also his party senior, L.K. Advani. There is need for people to be aware of India's "unlimited possibilities" on this day "without criticising one another", said Advani.
Advani's implied rebuke to Modi bears another message — and a reality check — for all those entranced by the image of Modi versus Manmohan. Modi's candidature for PM is not yet certain, even in his own party. Also, the 2014 battle is teeming with ambitious players and wannabe PMs, agendas and interests. But his masterful choreography of his own march towards Delhi, as showcased on Thursday, sends out a challenge to all the contestants that they will need to take into account and step up to.

Even his worst critics can't accuse Narendra Modi of not enlivening political theatre in a country which has grown fond of colourful competition on that front. Yesterday, Modi managed to upstage Manmohan Singh on what should have been a grand day for the PM — he was unfurling the national tricolour from the ramparts of the Red Fort on Independence Day for perhaps the last time but also for the 10th time, a feat no one outside the Nehru-Gandhi family had hitherto achieved. Only an hour later, from the far less lofty environs of Lalan College in the arid Kutch, Modi launched a rebuttal speech and a direct challenge: channelling a certain TV anchor, he said, 'Mr PM the nation wants us to spar against each other.'
On comparing the differences between these two speeches point by point — on the economy, on Pakistan, on corruption, on communal harmony, etc — it's actually a commonality that stands out. Both Manmohan and Modi were appealing for votes at the next hustings. With both of them sporting turbans, spectacles and beards, the optics also presented an odd likeness. And there is something quite intriguing about the idea of them participating in an American-style debate, face-to-face. Of course if this were to really come to pass, Congress would likely push Rahul Gandhi centre stage instead. He would have to transcend Hamletian equivocations to embrace the path of his father, grandmother and great-grandfather. The question is, will the Congress agree to an American-style debate?
BJP general secretary and Rajya Sabha MP Rajiv Pratap Rudy recently introduced a private member's Bill that calls for selecting the PM through direct elections. Insofar as that seems a distant prospect, so does a debate of the kind with which Barack Obama and Mitt Romney entertained the world just last year.

DULL AS THE WEATHER

The contrast could not have been starker. While Prime Minister Manmohan Singh dished out yet another lacklustre address from the ramparts of Red Fort this Independence Day, Gujarat Chief Minister and Bharatiya Janata Party's Election Campaign Committee chairman Narendra Modi delivered a rousing speech in Bhuj on the occasion. If Mr Modi went beyond extending good wishes to the people of his State and the country and took on the Prime Minister with gloves off, it was expected. After all, Mr Modi's speech was billed as a counter to Mr Singh's address to the nation and came in less than an hour of the Red Fort function. It must be said that the Prime Minister provided every reason to Mr Modi to tear into the text of his speech. Mr Singh reduced the significance of an occasion of national pride by singing paeans to the Congress's first family. Right in the beginning, he gushingly recalled the services of Jawaharlal Nehru, Indira Gandhi and Rajiv Gandhi, but did not mention the stellar contribution that another Prime Minister, Lal Bahadur Shastri, made to the country. He also did not mention the unparalleled role of Sardar Vallabhbhai Patel in shaping the India that we know today. Mr Modi's jibe that while he understands the compulsions of the Prime Minister in not recalling Mr Atal Bihari Vajpayee's contribution, he is flummoxed by the exclusion of Sardar Patel and Shastri, will have a hit a raw nerve in the Congress. The Prime Minister offered the Gujarat Chief Minister yet another chance to attack when he rendered platitudes at the Red Fort about relations with Pakistan. Since Pakistan has repeatedly breached the ceasefire agreement along the Line of Control in recent weeks and killed our jawans, people had expected Mr Singh to forcefully respond. But he did not in his address, and it is clear that he does not want to vitiate his forthcoming meeting with Pakistan's Prime Minister Nawaz Sharif in New York on the sidelines of a United Nations event. Mr Modi deftly referred to President Pranab Mukherjee's address on the eve of Independence Day in which the latter warned Pakistan that there is a limit to India's patience. The Gujarat Chief Minister wondered whether the Manmohan Singh regime had decided what that limit would be. The country too wants to know.

Mr Modi completely discredited the tall claims the Prime Minister proudly listed with regard to the various social welfare schemes the Union Government had undertaken. The Gujarat Chief Minister, expectedly, took special interest in panning the food security Ordinance, and laid bare, not through rhetoric but coherent logic, the lacunae in the proposed legislation. The Centre cannot brush aside the points he raised, because they are far too relevant to be given short shrift. Nor can it explain away, as the Prime Minister sought to do on August 15, its dismal record in managing the economy. Blaming global trends and saying all developing countries have slowed down, is a poor defence, because the Manmohan Singh regime has pulled down growth from a high of more than nine per cent to a pathetic five per cent by its policy paralysis.
While the Prime Minister dutifully read out what he considers are ‘achievements', he failed to even once mention the menace of corruption that has engulfed his Government. Here again Mr Modi got an opportunity to refer to Mr Mukherjee's address in which the President had spoken about rising graft and the need to combat it. The Gujarat Chief Minister ridiculed the Prime Minister for glossing over this important bit in the Red Fort speech. Given that this was perhaps Mr Singh's last speech from the Red Fort as Prime Minister, he could have shown some spine as a parting shot. Sadly, Mr Singh did not.