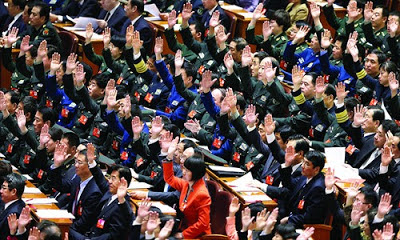 The Constitution of the Communist Party of China (CPC) has enshrined the "Scientific Outlook on Development," a political guideline that puts people first and calls for balanced and sustainable development, the 18th CPC National Congress announced as the week-long event concluded on Wednesday.
Some 2,270 Party delegates cast votes Wednesday, electing the new CPC Central Committee and the new Central Commission for Discipline Inspection.
Nearly 50 percent of the new Central Committee are newcomers, indicating that the CPC, with 91 years of history and more than 82 million members, has again completed its leadership transition.
Other members of 17th Party leadership, Hu Jintao, Wu Bangguo, Wen Jiabao, Jia Qinglin, Li Changchun, He Guoqiang and Zhou Yongkang, are not in the new Central Committee.

A press conference will be held at 11 am Thursday at the Great Hall of the People, where the new members of the Standing Committee of the CPC Central Committee will for the first time appear before the public.

Per capita income included in economic growth index
"To make China's development far more balanced, coordinated and sustainable, we should double its GDP and per capita income from 2010 for both urban and rural residents (by 2020)," Hu said in the report to the 18th National Congress of CPC.
This is the first time that per capita income has been included in the country's 2020 blueprint for a moderately prosperous society.

"Social justice" spotlighted in Congress keynote speech
Hu Jintao urged policy makers to improve the social justice system in his keynote report to the 18th National Congress of the Communist Party of China (CPC), stressing it should provide people with equal rights, opportunity and regulation for all.

Party Congress open doors to village officials
Shi Lei, the 24-year-old Party Secretary of a street administration office in Nanjing, has become a media darling thanks to the extensive coverage of his story as soon as he was confirmed as the first graduate village official ever for the Party Congress in May.
As a college graduate from Tsinghua University and a street official for four years, Shi's name showed up on a roster of 70 delegates representing a total of 4.85 million Party members in Jiangsu Province, for the upcoming Congress.

Building 'beautiful China'
Hu Jintao emphasized the importance of environmental issues and advocated the building of a "beautiful" China in the country's overall development plan on November 8.
In his report to the 18th National Congress of the Communist Party of China (CPC), Hu said "we must give high priority to making ecological progress, work hard to build a beautiful country, and achieve lasting and sustainable development of the Chinese nation."

New leaders: young with grassroots experiences
A notable feature of the leading officials born after the founding of New China, no matter what families they are from, is that they all have grassroots working experiences. They had worked with ordinary farmers, workers and soldiers, and been promoted step by step.

Young delegates
Among the delegates to the 18th Party congress, a number of CPC officials born in the 1940s, 1950s and 1960s, were under the spotlight.
They grew up in a totally different historic and social environment from their predecessors, which will, to a great extent, lead to a different administration concept and approach.

Half of Central Committee members are newcomersNearly 50 percent of the new Central Committee of the Communist Party of China (CPC) are newcomers, indicating that the CPC, with 91 years of history and more than 82 million members, has again completed its central leadership transition.
नई केन्द्रीय समिति : ग्लोबल टाइम्स
New Chinese Leadership BBC
at 8:39 AM

Email ThisBlogThis!Share to TwitterShare to FacebookShare to Pinterest
Labels: चीन